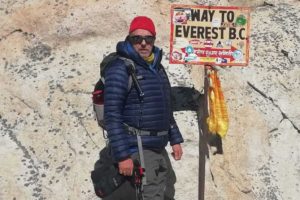 I Reached Base Camp

Well I Made it

My Progress so far.

Hi all  I was going to do a day by day account of my Trek but l think it will take to much to get everything where l want it to be, so l have decided to do a progress report on where l am and how it is all going.

Amazing but bloody brutal. At 11500 ft tonight but moving higher in morning. Trekking up over 1200 ft over 7 hours. But loving every bit so far

l have just crossed this bridge and the wind was howling it was a bit terrifying, l have a small video of it but the sound is not so good because of the wind.

It’s a truly beautiful place but a brutal challenge. But I’m doing well. I’m at about 14500 ft now at a place called Dingboche. I have been suffering a few headaches today due to the altitude, but  luckily we are here until Monday to acclimatise to the altitude.

Kevin Millers Auction at the Greenman Ringmer is getting closer now.
Just a few more weeks and you can all have a bid on a variety of items.
All of these items in the auction have been kndly donated by Companies and individuals around Sussex.

The Proceeds from the auction will go towards my total for Cystic Fibrosis Trust.

Thankyou to everybody that came to the auction or put bids on the vast amount of donated items.

The Auction made over £6000 for Cystic Fibrosis Trust

Ridgeview Ditchling has donated to the auction a Tour and Wine Tasting tour for two.

Squiggly in the Snug

Squiggly in the Snug has donated to the auction a stained glass wooden structure.

The Highlands Inn have donated to the auction a meal voucher to the value of £50.

Plumpton Racecourse has Donated to the auction a day at the races for next season.

everyone needs a Teddy Bear

Hes cute and cuddly who wouldnt what to bid on him/.

If you have any items you would like to Donate to the Charity Auction please get in touch through my contact form or via the sicial media links below.

Charity auction at the Greenman.

Kevin will be holding a charity auction in support of Cystic Fibrosis Trust at the Greenman Ringmer east Sussex as part of his fund raising for his Everest Base Camp Trek.
Not long now just under two months untill the auction will be held.
There will be something there for everyone plus it will be a great evening out helping a good cause.
lf anybody has anything to offer for the auction or sponsorship for my Everest Challenge please

let me know though my contact form or via email.

l would like to thank everybody for there help and support.

As most of you know as part of my Everest challenge later this year,
I will be holding a
CHARITY AUCTION NIGHT AT THE GREENMAN RINGMER.
This will be held on Friday 25th May .

Gavin May of shelleys estate agents.

Advertise the auction with a board outside of your house, which has been Generously offered by Gavin of Shelleys Estate Agents Ringmer.
Contact

Just to let everyone know that I have decided to deferre my place in this years London marathon as if I do it now I’m guaranteed a place in next years London marathon.
My reason for this decision is that since mid January I have been in suffering from groin/pelvic pain when I do any serious distances and was advised to ease up on road and distance running by my GP .
I have had X-Ray’s and blood tests and have been on strong painkillers for a few weeks and was intending to do the BATH HALF and see how I felt .
But with Mother Nature putting pay to this years bath half I have decided to aim to do Bath and London next year.
Therefore taking my GPs advice and ease up and get in top shape to give me the BEST chance of reaching EVEREST BASE CAMP in November.

Keep Donating to Cystic Fibrosis through my JustGiving page.

Less than 100 days until London Marathon

Base Camp This Way

Things are starting to get serious with now less than 100 days till London marathon and less than 300 days till I fly to Nepal to attempt Everest Base Camp .
It’s been over two & half years since accident over the the downs which didn’t only break me physically it also shattered me mentally far more than I realised.
But over the last few weeks I really feel things have moved on for me in all aspects.

This year is going to be massive adventure in so many ways.
Which kicks off on March 4th with the BATH HALF MARATHON in memory of an amazing young lady that I promised only a few days before she passed away that I would try and beat my personal best half marathon time.

Secondly run in the most iconic marathon in the world THE LONDON MARATHON on the 22nd April of which I was fortunate enough to to gain a ballot place after 8 years of trying.
Not sure it is going to a record breaking or very pretty run but with support from Brett Powell at Powells sports therapy so should manage to pull it together.

The third thing this year is going to be a CHARITY AUCTION at the GREENMAN RINGMER on the 25th May of which everyone is welcome. There will be great items up for auction.

The fourth part of this adventure is to ATTEMPT TO TREK TO EVEREST BASE CAMP .
I say attempt because you can not train against how your body copes with such high altitudes and lack of oxygen.
But this challenge is an absolute first for me in many ways.
The obvious ones lack of oxygen.
Temperatures in the -20s . Lack of sleep and altitude sickness.

More personal things are being away from my wife & family for nearly 3 weeks as have only been apart for 3 nights in 22 years of marriage.
Doing a long haul flight as Kathmandu is about 16 hours (only flown as far as Corfu)
Plus flying from Kathmandu to Lukla ( officially the most dangerous airport on earth).

But none of this things are as bad as living with CYSTIC FIBROSIS every day of your life so if you can help ME or the CYSTIC FIBROSIS TRUST in way with goods or services towards my auction or a donation on my Justgiving page.